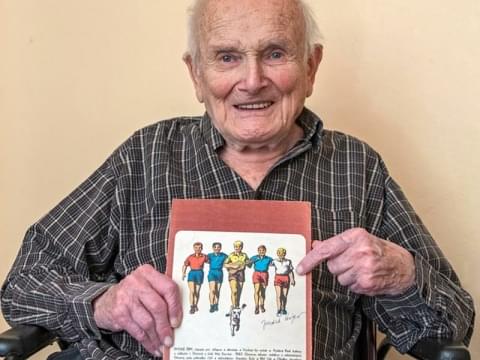 95-year-old Jindra Hojer became the pattern for the character of Jindra Hojera from “Rychlé šípy”, a famous Czech comic. As a child, he was a member of scout troop led by Jaroslav Foglar and he remembers the five years that he spent with the troop as among his favorites. He stayed with the group until scouting was banned by the Germans during the war. After Foglar's death, Hojer participated in the book, “Jestřábe, díky”.

He filled his life with love for chemistry, puzzles and traveling. For most of his life, Hojer worked at the Research Institute of Organic Synthesis in Rybitví near Pardubice. After receiving his candidacy, he lectured at the University of Pardubice. Hojer currently lives in a retirement home in Pardubice, where he never allows himself to get bored. In addition to reading fairy tales to children in kindergarten, he gives lectures to pensioners about his travels through Europe and also he just finished his second book.